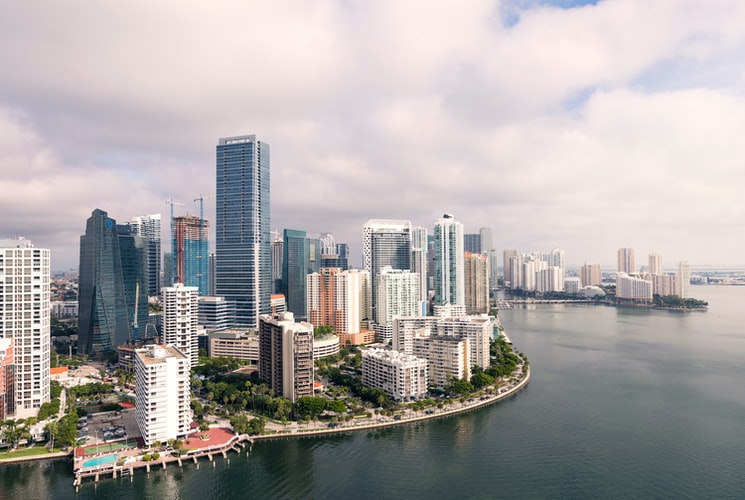 I’ve never been a true digital nomad myself, but lately, I’ve been dreaming about it a little bit more than usual. Perhaps this is because we’ve all been inside for the past (nearly) six weeks, or because transitioning all of my in-person classes has been more enjoyable than I originally thought it would be, but I’m starting to wonder if I’d really be able to make a remote lifestyle work. After all, I’ve been loving having my coffee in the morning while catching up on emails and grading.

Being a digital nomad gives you the freedom to explore the unknown with your work in your back pocket (or laptop bag). You can walk around and see the beauty of Budapest, witness the beautiful sights of Kyoto in Japan, or even visit the huge cities like New York in the US. And while there are so many options for those considering the life of a digital nomad, there’s one city I’ve been told is a great fit: Miami, Florida.

Overall cost of living is fair

Cost of living is a crucial consideration, especially for remote workers, and Miami does fairly well by this metric. Biz Journals reports that Miamians spend $2,513 a month on average, with most going on rent ($1,836), followed by food ($358), gas ($142), utilities ($115), and internet ($60). Subtracting gas expenses, you’ll be spending just a little over $2,000 a month in Miami. That’s significantly less than the cost of living in the five most expensive cities in America: Boston, Oakland, San Jose, New York, and San Francisco (all over $3,000 monthly, even without gas expenses). Even better, your expenses will probably go down considerably when you factor in the next consideration on this list.

There are coworking and coliving spaces

Being a digital nomad often means having to work and live side by side with others. Such arrangements are beneficial as they not only get you more connections and friends, but also a large reduction in your monthly bills. In this area, the city is definitely a go-to destination for digital nomads. Miami has many coworking spaces dotted across the city where you can work in a professional environment. Each one offers specialized services such as private offices, high speed internet, and networking services. Leading coworking space Industrious has three locations in Miami with each one designed to accommodate everyone from freelancers and startups to Fortune 500 companies. As for coliving spaces, Magic City currently has only X Miami, but another one is on the way as real estate developer PMG is constructing a rent-by-bedroom building at Biscayne Boulevard. Two more co-living towers — both to be built at Wynwood — are in the pipeline, too, courtesy of PMG and London-based developer The Collective. Once these co-living spaces are opened, Miami will be a digital nomad’s heaven.

There are lots of startups

Miami is now a startup haven, thanks largely to its emergence as a tech hub. The city pulled in $1.4 billion in investment money in 2018 alone, just a year after it ranked 1st in startup activity in America. eMerge Americas CEO Felice Gorordo even describes Miami as “a startup in and of itself” where anyone can make it. That is, if you’re “willing to roll up your sleeves” and work. With more people from across the globe bringing their business to Miami, expect the city’s thriving entrepreneurial scene to get even better. This is great news for digital nomads, as more businesses mean more work opportunities.

There’s a life after work

Miami is a mecca of sights and sounds, with lots of things to check out for that well-deserved R&R. Miami’s spectacular beaches are obviously high on the list. Then, there’s the Art Deco District, where beautifully restored 1930s-era buildings make for a nostalgic stroll. There’s also Bayside Marketplace and its 150 or so shops, cafés, and restaurants. You can even experience Cuban culture at Little Havana with its street art, open air social areas, nonstop Latin music, and various restaurants and specialty food shops.

Finally, there’s the well-known Miami nightlife — diverse, pulsating, and entertaining. It’s the perfect cap to a hard day’s work, and one of Miami’s most enticing offerings. The adult playground that is Basement, for instance, lets you dance, party, bowl, and ice-skate, plus maybe meet a celebrity or two like Drake and Rihanna. However, if you’re the laid-back type, then there’s Do Not Sit on the Furniture and its intimate, everyone-is-welcome vibe.

Fact is, you’ll never run out of great things to do in Miami. That, plus the city’s reasonable cost of living, its various coliving and coworking spaces, and its robust startup scene, make me dream about going back to Florida someday.

« On the Dark Shores of the Delta
“We’re Here For You:” The Unsolicited COVID-19 Email »

I'm a writer, teacher, traveler, and a new mom living in the sunny Sonoran Desert! I write to share stories about our complex, beautiful world, and I teach to help others think more deeply about their words and their stories. Read More…

Here’s the scoop: having a baby changes a lot of

I know that babywearing has been a custom around t

My morning view, a little different than what I’

A man, his fish, and four hungry travelers 😂 An

Our next day started off with a stroll down 2,000

I love texture 😉😀😁 We don't get enough of

On our #foodtour through the illustrious #Carmelma

One of Israel's biggest controversies: whose hummu

One of my FAVORITE things ever came at the end of

Yes, this is a carbonated water with plants in it.

Starting our first morning off right - with a food

I didn't mention this in my first pic, but we are

Welcome to our Tel Aviv food tour!! I don't always

Before we head off on our newest adventure, I need

Never a place without beads during Mardi Gras 👍

Mardi Gras wouldn't be complete without a visit to

If it can be fried, it will be fried. The mantra a

I'm a writer, teacher, traveler, and a new mom living in the sunny Sonoran Desert! I write to share stories about our complex, beautiful world, and I teach to help others think more deeply about their words and their stories. Read More…

Here’s the scoop: having a baby changes a lot of

I know that babywearing has been a custom around t

My morning view, a little different than what I’

A man, his fish, and four hungry travelers 😂 An

Our next day started off with a stroll down 2,000

I love texture 😉😀😁 We don't get enough of

On our #foodtour through the illustrious #Carmelma

One of Israel's biggest controversies: whose hummu